At the end of March, The Cure became the first band in the Teenage Cancer Trust’s 14 years of gigs at the Royal Albert Hall to headline two nights, Friday and Saturday, after every ticket to the first was snapped up by fan club presales.

Through the efforts and industry of the benefits’ apparently indefatigable driving force, TCT patron Roger Daltrey, and promoter SJM, the dates attract big hitters, Ed Sheeran, Paolo Nutini, One Republic and Suede among the headliners this year. It puts the charity’s persuasive message out to a broad public, across the generations, but two sell-out nights from The Cure was a perfect exception.

“Friday looked like a great day to do it, so that’s what the band was focusing on, and straight away SJM was holding the Saturday,” production manager, Steve Allen, tells EIN during their second soundcheck.

“Robert Smith is a total original and to have him here for two nights is such an honour,” Daltrey said.

Alongside Smith, the latest version of the band features American guitarist Reeves Gabrels, once with Bowie’s Tin Machine, bassist Simon Gallup, who’s been there, by and large, since 1979 and doesn’t appear to have got any older, drummer Jason Cooper and keyboard man Roger O’Donnell.

Their 45-song, three-hour Teenage Cancer Trust set made the occasion(s) even more special, dropping in on just about every chapter, from 10:15 Saturday Night to The Hungry Ghost off the last album, 4:13 Dream. And it was a big night in terms of the video, at the back of the stage, and the lighting too, which was bolstered by a substantial Cure floor package.

Allen has worked on the TCT shows since The Who headlined the first, in 2000. The technology might have changed, he says, but the principal remains the same.

The programme has retained some 95 per cent of the suppliers from its origins, Entec, and PRG among them, and the venue has fallen in with its unique approach.

“Over the course of 14 years, going digital has meant we can do all the sound on one small [console] rather than having to drag desks in for every act, and it’s the same with lighting,” Allen explains. “You can have three artists with three different looks playing on the same night and all the information is stored on a show file. Ten years ago, everything front of house was double-stacked and squashed in. Now you can swing a cat in there.

“[The Royal Albert Hall staff] were really shocked by the duration of the shows to begin with, and by the 100s of people that descend on the stage and the backstage, so it was a learning curve for them,” Allen, who will start planning for the 15th anniversary shows at the end of the summer, adds. “And it’s definitely got better. It’s not quite perfection, but it’s getting there.”

“The last two nights, for us, have been astoundingly good, really moving concerts,” Robert Smith said, after closing the show with The Cure’s first single, Killing An Arab.

The Cure’s frontman has been telling XFM that the band’s two shows at London’s Royal Albert Hall in aid of Teenage Cancer Trust were “pretty sensational”… but that his plans for the rest of 2014 are still up in the air. 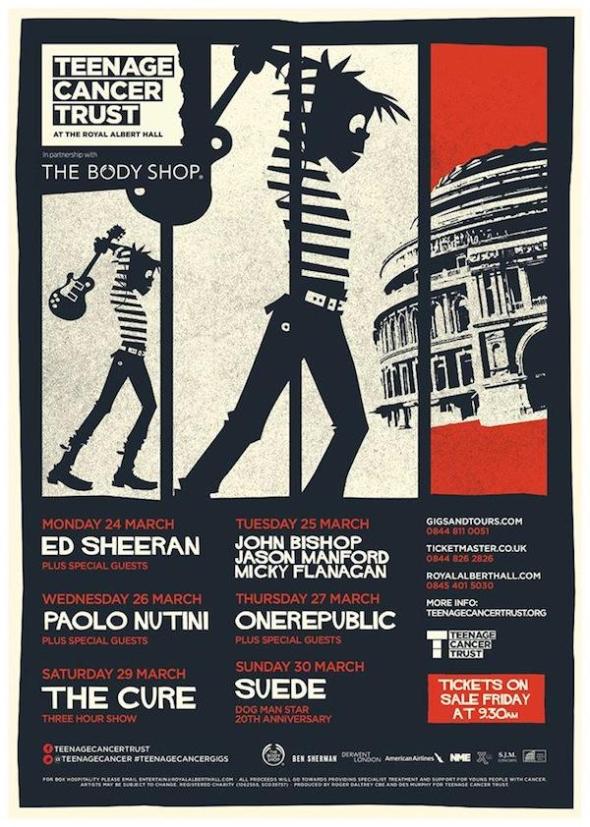 It was reported earlier this year that fans were likely to get the follow-up to 2008’s 4:13 Dream – a series of songs that were recorded over six years ago but which remain unreleased.

“We’re in a weird kind of predicament,” Smith told XFM’s John Kennedy after coming offstage at the Albert Hall last night (Saturday 29 March). “I’ve finished singing and mixing an album that was made by a band that no longer exists. So I’m trying to be convinced that I should release what is the second half of an album that effectively came out in 2008.  It’s a bit of a sore point, to be honest.

“It’s good, it’s really good, but it’s not really new. I just never sang it. I couldn’t be bothered! I didn’t think the words were good enough, but over the last eighteen months, I’ve re-written it. It’s an album that is really different to anything else we’ve done. People who want to hear it will hear it and those that don’t, don’t. They’ll just keep dancing to Close To Me and Love Cats.

“We’re playing in May in America and then I don’t think we’ll play again until late September. So it’ll probably come out in that summer ‘dead air’ period for albums.”

Robert revealed that the album was likely to be released on the Fiction label – which was the original home to The Cure between 1978 and 2000. “It seems like a nice way of squaring the circle,” he says.

“Having said all that… I’ve no idea. I’m very bad at planning long term. I’m at an age where I’m enjoying what I’m doing. I don’t feel such a strong urge to beat people over the head with new stuff.”

The Cure performed over two nights in aid of the charity, which helps teenagers and young adults come to terms with being diagnosed with cancer and the extensive treatment that goes with it. Each show lasted over three hours and featured 40-plus songs, some of which have rarely been performed live.

“I like dipping into the history of the band. I’m so enthralled by digging out songs we’ve never played before. They’re like new songs to me.”

The frontman also paid tribute to Roger Daltrey and his work with Teenage Cancer Trust: “I’m utterly amazed at what he does. The time he puts in, keeping it going. It really is staggering. It’s a totally different vibe to anything else we do, it really is.”