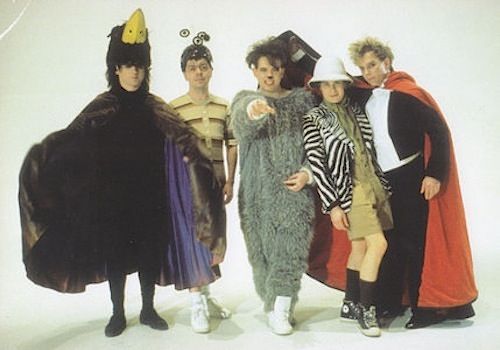 There was a time a few years ago when the Cure – a band that started out as the Easy Cure in 1976 in Crawley, England–undoubtedly was perceived by many in the States as an enigmatic and somewhat “arty” outfit. And not without reason: The Cure’s members lean toward a trendy-Briton look in clothing and hairstyles and have drawn upon Camus as inspiration for song lyrics, while the band`s music at times has been–in the words of lead singer- guitarist-songwriter Robert Smith – “quite difficult.”

But recently the Cure`s image and fortunes in this country have appeared to be changing. After years of minimal airplay and “cult favorite” status, the Cure earned a gold record in 1986 for “Standing on a Beach,” a retrospective collection of singles that has sold more than 750,000 copies. Their American tour last year found them booked into a number of large halls, and their current tour consists almost entirely of cow-palace-size venues – including the Rosemont Horizon, where the band plays Tuesday.

Meanwhile, the band`s latest LP, “Kiss Me, Kiss Me, Kiss Me”- an ambitious and inventive double-album offering pop material, dance music, a quasi-rap number and some of the Cure’s “difficult” stuff–has climbed to the upper regions of the Billboard album chart and attained gold status.

The band certainly would seem to be leaving the old intense-artiste image behind and veering into mass-acceptance territory, and the process can only be aided by the video for the Cure`s latest single, “Why Can’t I Be You?” The costume-filled clip features the band members done up as Humpty Dumpty, a bumblebee, Count Dracula and a court jester, among other characters. Smith himself is decked out in a bear suit that he doffs at video`s end to reveal a brocade dress underneath. In the clip`s final moments, Smith turns to walk away, trips and falls.

“I must admit I was quite drunk,” says Smith with a laugh as he recalls the making of the video. “When we talked about the video originally with (director) Tim Pope, we said we wanted to do some choreographed dancing. He said we’d never be able to do it. So to disguise our ragged ability at dancing in any kind of formation, we decided to dress up. There was a good reason for it at the time, but nobody can really remember what it was.

“When we make videos with Tim, he just plies us with drink and then films us. But that bear suit was incredibly heavy. The more I would sweat through the day, the heavier and heavier it became. In the end it felt like there was a real bear sitting on me. By day’s end I was fading – this was, like, 3 in the morning–and I was supposed to twirl and the bear suit would fall off me, and I`d be there in a flowing ball gown. But he didn’t get that take on film, and when we did it again, I tripped from exhaustion.” 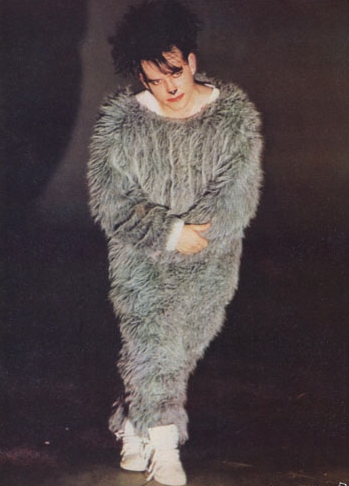 All of which, needless to say, is a long way from Camus. You might think a band that has been plugging away for a decade – surviving a number of personnel changes – would feel some sense of vindication when it finally hit gold-record status, but Smith says that’s not the case.

“What we were doing for the first five years, disregarding the first couple of pop singles, was playing some music that was quite difficult, really,” he says. “So I wouldn’t feel vindicated because what we do now is quite different from what we did for the first half of our career. We played music then that never would have gotten played on the radio. We still do that, but our output now is more balanced. There`s more easily acceptable entertainment available from us now.

“We started off being a pop group in our early days, and I think we’ve returned to being a pop group. People always seem to be surprised now at how many records we sell. We`re playing two nights at the Forum (in Los Angeles) this tour and we’re playing Madison Square Garden. People think: ‘Who are the Cure? Why are they selling so many records when they don’t get television or radio slots?’ That’s the only area where I do feel vindicated, I suppose. Each time we come back to the States, we play to more people.

“But I don`t think we’ll ever reach huge proportions. I never expect to. The popularity of the group now has actually gone beyond what I imagined it would. I’m really surprised at how many copies ‘Standing on a Beach’ sold. If I look at what else sells . . . . I mean, U2 do well – and I’d never in a million years compare them to us – but there’s very little else in the American charts that I can even remotely feel any empathy with. So obviously I’m surprised when we do well.”

If the Cure’s fortunes have been changing, so, says Smith, has the working atmosphere within the band.

“I enjoyed last year`s tour more than any other,” he says. “But it wasn’t actually to do with the popularity. It was for much more selfish reasons: I enjoyed being on tour with the group. There was a new atmosphere, and the concerts were so much better because of that atmosphere.

“It spilled over into the recording of the ‘Kiss Me’ album. We played live in the studio, and I was able to ‘give a look.’ It was like a really good jazz group: These looks would go on, you’d communicate by glances, and things would change as you’re actually playing. Which is what I call a group. Anyone can rehearse and play constantly any song in the world. But if there`s something more, when you feel able to change a song in mid-flight . . . . We did a couple rehearsals before this tour, and everyone was actually grinning onstage, which hasn’t happened for a few years.”

While the Cure’s current sound is more propulsive and energetic – and more “pop”- than some of its previous playing, the band is still a long way from becoming the Archies. Lyrics on the “Kiss Me” album tend toward the troubled and bleak, the overall sound is darker and moodier than most mainstream pop, and some of the songs feature lengthy introductory instrumental stretches. Striking a balance between pop and “atmospheric” moods is, in fact, one of Smith`s concerns at the moment.

“I’ve always tended to disregard the audience in that I’ve never worried about what we’ve done before and what people expect us to do next,” he says. “We’ve always done things from a very selfish point of view. When we were feeling sort of morose or introspective, the music came from there. The thing I`m very conscious of now is being able to still perform that type of music and continue to be taken seriously. The balance is the most difficult thing about what we do: being able to do pop songs but at the same time allowing ourselves the space to do things that are more serious. Allowing ourselves to perform and write songs that are more than songs about boy meets girl, more than facile things.

Along with the changes in the band`s fortunes, says Smith, there has been a change in his own demeanor. Once seen as an iconoclastic and somewhat “difficult” person, Smith now appears chatty and straightforward in conversation.

“I think that old perception probably grew out of a small amount of truth,” says Smith. “I was considered to be difficult for a period of time purely because we were making music that didn’t justify answering sort of stupid questions. People would be asking me what I considered to be very tedious questions about what we were trying to do, when it was patently obvious to the people who liked what we were doing. I’ve never really had any desire to sell what we were doing. I find it very difficult to justify what we do – it’s justified by the fact it`s there.

“So I got a reputation for being difficult. At times, I took it to an extreme degree. I was very belligerent at times. But I felt that if no one really liked it, it didn’t matter. We were doing something we wanted to do. It was like a crusade almost. Richard the Lionhearted wouldn’t have explained things.

“Since then, I’ve changed obviously. I have become more amenable.”

Retrospection comes fairly easily these days to Smith, who has just finished – in tandem with a Melody Maker writer–a book on the Cure titled “Ten Imaginary Years.” Scheduled for September publication, the book will deal honestly, Smith says, with the times when the band was “fueled by a kind of dementia.

“I don’t mean to make it sound like heavy going, though,” he says.

“It’s actually quite a funny book. I wanted it to be a truthful representation of what being in a group is like, rather than:  ‘They found themselves onstage. They never dreamed it would be like this when they were in school.’ ”

And is there a particular anecdote from Cure history that stands out in Smith’s mind?

“There are so many,” says Smith. “There was the time we got arrested in Holland. The whole group went to the beach at 7 in the morning in Rotterdam. This was about 1980. We decided to go skinny-dipping, and eventually about 13 armed policemen descended in three police cars. Quite bizarre. A hysterical old lady had phoned up and said there were madmen running about on the beach. We went very peacefully. We didn’t have any clothes on, so we didn’t have much choice.”